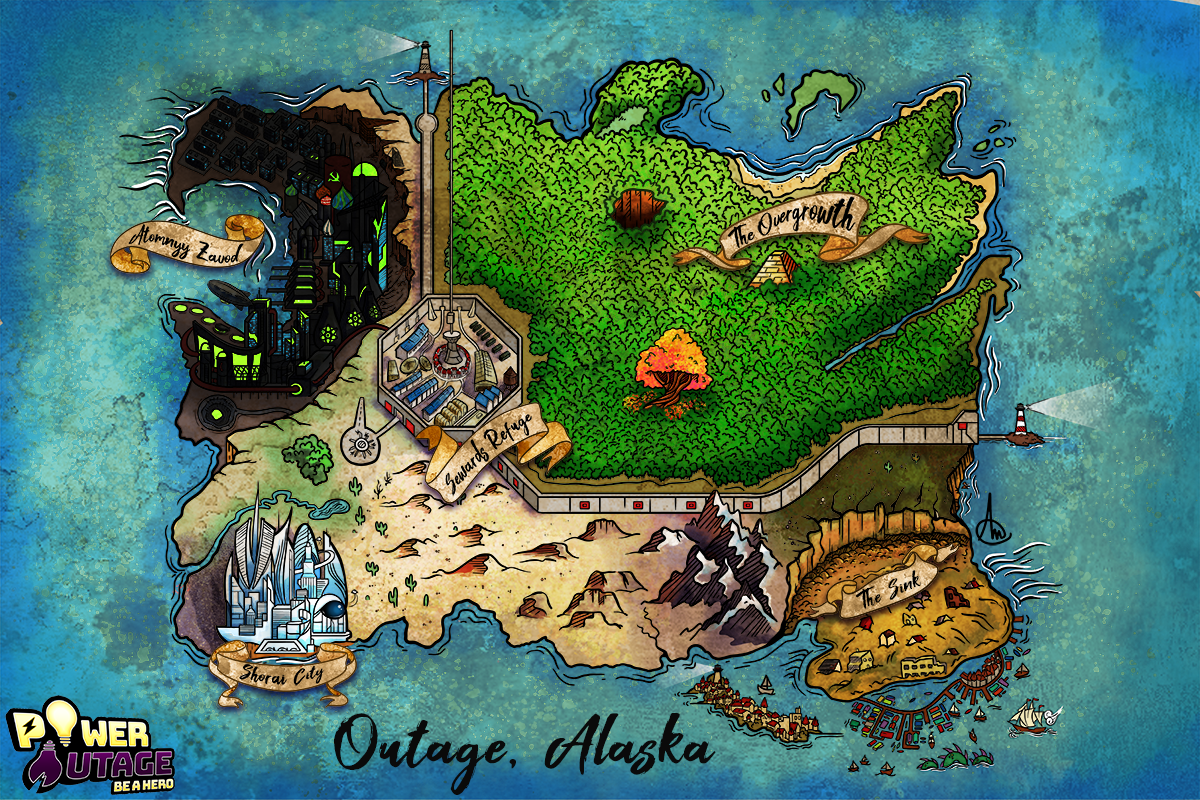 The World of Power Outage

The world of Power Outage was very similar to our own until the 18th century until a large island mysteriously appeared in the middle of the Pacific Ocean.  Japanese sailors were the first of this age to attempt to land on the shores, but soon discovered that they were not the first civilization to know the land.  Evidence of the ancient ruins of a long forgotten yet advanced civilization had left their mark on the landscape.

The island was not without its dangers however, as large creatures, dangerous plant life, seismic activity, and even the ancient technology of the island itself, kept attempts at colonization at bay for a full century.  It didn’t, however, stop adventurous bands of heroes from delving deep into its mysteries to return with fantastic  prizes for their countrymen.

The evidence of these advances soon became evident in the Russo-Japanese War. The power displayed in the Japanese naval presence was only countered by the continued pressure of Russian numbers and great landmass resources.  Still, in the end, the two great powers finally settled their dispute by staking individual claims on the small footholds they could hold onto.  The Japanese occupied the ancient city of the forgotten civilization, while the Russians claimed the area around a large bay, backed by high cliff faces, bearing exotic and rare minerals.

As time moved on, an American politician negotiated the purchase of Alaskan landmass and most of its surrounding territories including the, as of yet technically unclaimed majority the island. With the agreement , the original Russian colony maintained territorial control while recognizing American sovereignty.  The Japanese colony, not recognizing US authority continued its possession and slow expansion unheeded of American demands.

Seward, the politician involved was initially mocked for his deal, in a now infamous children’s song

A pretty penny all for not,

It’s so much land, he promptly pouted,

But full of ice and rocks we shouted,

Out of office, out of courage,

Off  he sailed to frozen outage.”

But Seward’s infamy quickly turned around as explorative teams quickly realized the unique and miraculous discoveries and properties of the island.  It was a scientific wonderland for a rapidly industrializing country, and an age of wonder that began the first stepping stone to America becoming a heavyweight on Global world scape.

The last remaining legacy of Seward’s claim to fame was named from his poem, and by the start of the 20th century, Outage became a territory of the Alaskan state.  This act did not come without its complications.  The Japanese colony now a full fledge city-state named Shorai, was not willing to stop its advancement into the island proper and to what the Americans felt was sovereign territory.

Tensions rose not just here, but around the world, and soon global conflicts were occurring all over.  Tyrants rose to power and allied nations became embroiled and divided over multiple fronts.

Conflicts boiled over onto the stage of Outage.  Russian cooperation with American forces kept the rapidly techno-advancement of Shorai’s expansion at bay, until the very end of the great war, and the start of the Atomic Age.  Fortunately, in the world of Outage, the use of atomics directly in weapons never came to use, as clear heads of that age realized early the dangers of such proliferation.  But the power source became the fuel of an unstoppable allied force.

With the war over, due to treaty agreements, Shorai city was allowed to maintain its original occupied territories, but under the condition that expansion across the island would not be allowed.  To the residents of Shorai city, this was no problem, as plans they had designed had their eyes set toward the sky, and an ever increasing expansion upward.

Over the next several decades a sense of homogenous stasis occurred on Outage.  Conflicts between the major powers had all but resolved and trade, communication, and borders slowly broke down.  Some say this was the setting for the arrivals of the first powers.

Some claim these powerful characters were there from the very beginning, moving and shifting the politics and progress of the island in secret.  Some claim it began with the American experiments that prompted the creation of The Overgrowth, an out of control experiment in flora and fauna of the island.  Some claim it started when the mysterious darkness overtook Atomnyy Zavod, the Russian Territory.

Some claim it happened from the continual plunging of Shorai’s’ discoveries further and further down into it’s ancient civilizations depths.  Yet others claim it is simply a product of the magical island itself.

Whatever the case may be one thing is known for sure.  The large continent like island of outage attracts the abnormal, the super, the mysterious, and the wonderful.  Good and bad.  Heroes and villains have come up out of the islands many territories.  Some with the power to effect not just the island, but the world.  What does this mean for the future of this alternate Earth?